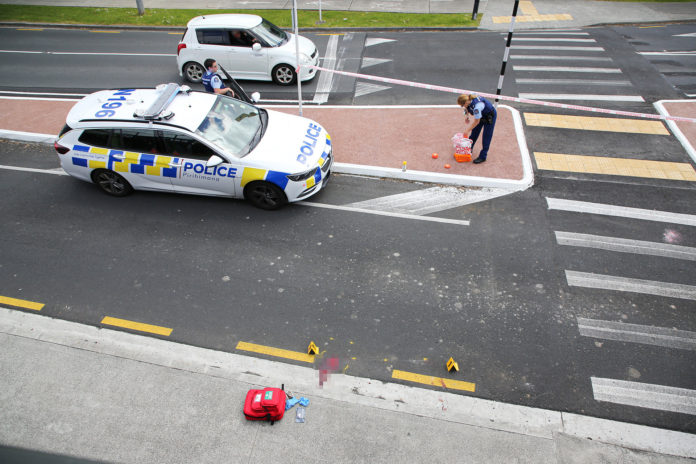 A Cyclist heavily injured after Hit and Run police car chase in Auckland, Newzealand.  A police chase started when the suspected car driver refuse to pull over after police signaled.

Acting District commander Inspector Shanan Gray Said a Flagged suspicious vehicle departing “address of interest” this evening and officers signaled for pull over but driver failed to pull over results in a Hit and Run case leaving a cyclist injured.

This Hit and Run incident occurred near Helena St and Don Buck Rd Intersection. The site was also closed and traffic was diverted to other adjacent roads.

Shanan Gray added “The fleeing vehicle was found hidden several kilometers from the site of the hit-and-run and the driver was taken into custody by police. Police is investigating the circumstances of the crash and the Independent Police Conduct Authority will be notified”

Spokeswoman at St. John said “said three ambulances were sent to the crash and one person with critical injuries was taken by ambulance to Auckland City Hospital”

A 25 year old suspected driver was identified and appeared in Waitakere District Court, who is charged with Hit and Run Driving offense along with other charges.

Victim of this Hit and Run incident is still in critical condition at Auckland City Hospital. Said hospital spokes woman.

What is Hit and Run?

A Hit and Run is an incident when a vehicle hits humans or valuable property and then the driver of suspected vehicle deliberately flee from the scene. In some countries there are some exceptions which is not categorized in Hit and Run, includes property or vehicle with no humans or animals around.  But in most courtiers it is considered Hit and Run case even if the incidents not occurred on road or highways and also differ in state level and even district level.