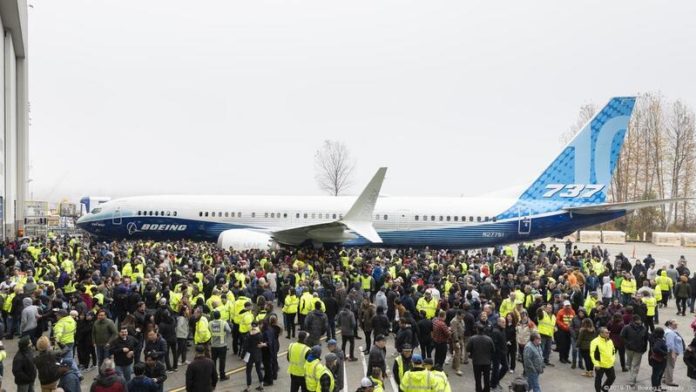 Boeing announced Friday the largest variant of the 737 MAX family, 737 MAX 10 has rolled out from the Boeing’s 737 factory at the Renton, Washington. Thousands of Boeing employees gathered to celebrated the occasion. The news comes, despite the world grounded the Boeing 737 MAX aircraft series since March after two airplanes crashed.
Boeing’s key executives praised the 737 MAX entire team and recognize the incredible achievements on accomplishment of the production.

“Today is not just about a new airplane. It’s about the people who design, build and support it,” said Mark Jenks, vice president and general manager of the 737 program. “This team’s relentless focus on safety and quality shows the commitment we have to our airline customers and every person who flies on a Boeing airplane.”

737 Chief Pilot Jennifer Henderson, started his speech with“I’m honored to take this airplane on its first flight and show the world what you’ve put your heart and soul into.”

Boeing launched it’s longest version of the MAX on 19 Jun 2017. The 43.8m long 737 MAX 10 powered by two CFM International LEAP-1B  engines and capable of flying up to 3,300 nautical miles with a maximum passenger capacity up to 230. While the 737 MAX 10 is certified for 188-204 passengers in a two-class configuration which makes it the lowest seat-mile cost of any single-aisle airplane ever produced.

The aircraft will now undergo system checks, fueling, and engine runs prior to its first flight until next year.