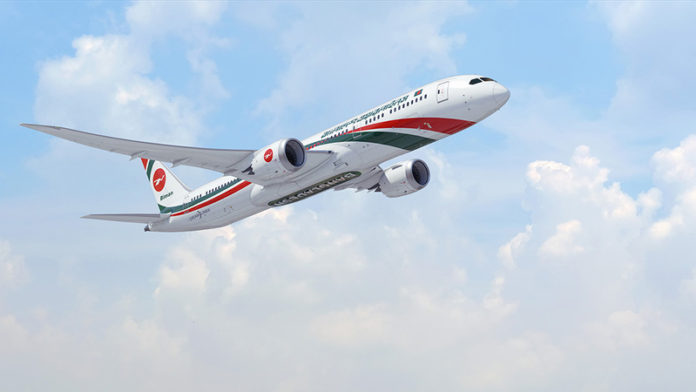 Boeing announced the sale of two super-efficient 787-9 Dreamliners in a deal worth $585 million.

Biman Bangladesh Airlines has today announced that they’ve placed an order for two additional Boeing 787-9 aircrafts at the 2019 Dubai Airshow. The list price for this deal is $585 million.

Biman, the national flag carrier of Bangladesh is expanding its 787 Dreamliner fleet in a move to upgrade and modernize its fleet.

“One of our key priorities is to have a modern fleet with technologically-advanced airplanes that will enable us to expand our international reach,” said Air Marshal Muhammad Enamul Bari, Chairman, Biman Bangladesh Airlines. “While we have a good domestic network, we plan to extend our international network to include more destinations in Europe, Asia and the Middle East. The 787 with its technological superiority, excellent operational performance and passenger experience will enable us to achieve that goal.”

The Biman’s 787-9 Dreamliner has a seating capacity for 298 passengers in a standard three-class configuration and can travel up to a range of 7,530 nautical miles (13,950 kms) while also consuming 25% less fuel and emissions compared to othermember of the super-efficient Dreamliner family.

Stan Deal, president and chief executive officer, Boeing Commercial Airplanes said: “Biman Bangladesh is showing us the powerful potential of the Dreamliner family. Just last month, the airline launched a new non-stop flight from its hub in Dhaka to Medina, Saudi Arabia. It’s a great example of the 787-8 serving as a ‘market opener.’ And now, Biman adds the 787-9 which brings more seats, more range and more cargo-carry capability for the routes that need it. The two will form a profitable network solution for Biman.”

Additionally, Biman has signed a multiyear agreement with Boeing for Jeppesen FliteDeck Pro electronic flight bag (EFB) application to improve operational efficiency and pilot decision through use of digital charts and navigation information.