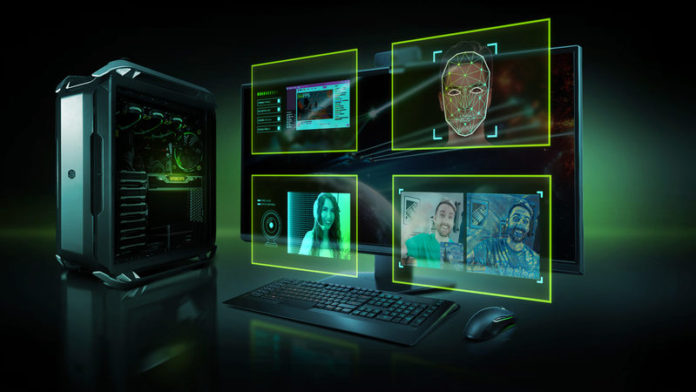 NVIDIA has created an Al-powered greenscreen for Twitch users much to the amazement of streamers and gamers. Twitch users will soon experience the action.

NVIDIA has finally revealed the RTX broadcast engine which is powered by the Tensor Cores on RTX GPUs. They have the ability to do live filters, greenscreening among other exciting features for Twitch users. The RTX greenscreen is an interesting feature which can remove the background from Twitch and change it with whatever the user wants. NVIDIA has collaborated with OBS, a live streaming application to integrate the RTX greenscreen.

“With it, livestreamers will be able to remove their background environment or instantly teleport themselves anywhere — in this world or in virtual ones,” This was said by the company. The exciting new feature will be presented at Twitchcon 2019. It will also be available for OBS by the end of this year or the start of the next year.

The RTX AR SDK has the ability to detect one’s face from a webcam and can track features like the eyes and even the complete face. There is another SDK called RTX Style Filters. It can turn the users feed into a Japanese anime character or whatever they feel like.

The downside so far is that all of the features are available through SDK for now unfortunately. However it will be available for apps pretty soon as NVIDIA is working with XSplit and Streamlabs for implementations.

NVIDIA said that its NVIDIA RTX Encoder which was introduced earlier will work on Twitch Studio among other devices which would fasten frame rates and image quality for games during streaming giving gamers a whole new and advanced experience.