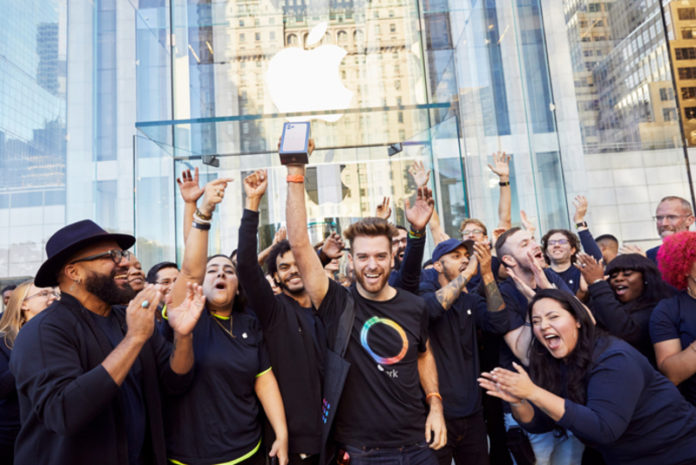 Apple has finally revealed the iPhone 11 and people are waiting in long lines just to get their hands on the new models.

Apple’s latest iPhone 11 finally hit stores this Friday. The brand new smartphone has made Apple fanatics go mad. Long lines gathered around Australia, Singapore, UK, Japan, Germany and other countries and the people could not hold their excitement.

The adrenaline rush was similar here in the US as well. A huge crowd gathered at New York’s Fifth Avenue Store which opened on Friday where people were eager to their hands on the new iPhone. There was more to it as Apple CEO Tim Cook was there too to greet the crowd. The store opened nearly after two years of renovation.

Analysts have predicted good numbers for the new iPhone 11 models particularly the $699 model. One of the upgraded features which have excited the customers is the triple-camera feature on the iPhone 11, iPhone 11 Pro and iPhone 11 Pro Max. Upgraded cameras are not the only offering from Apple’s latest Smartphone brand. The iPhone 11 models also come with higher battery life, faster processors as well as more durable screens.

The iPhone 11 models were not the only devices that Apple released. Apple also introduced the Apple Series 5, a new addition to the Apple Watch. These phones were announced at an event in Cupertino Campus on September 10. The iPhone 11 models are a repetitive upgrade of the iPhone X models released the previous year. Currently, Samsung is top Smartphone brand followed by Huawei with Apple coming in third place. Hopefully, the Apple 11 iPhone Models will improve the company’s position but it is too soon to tell.