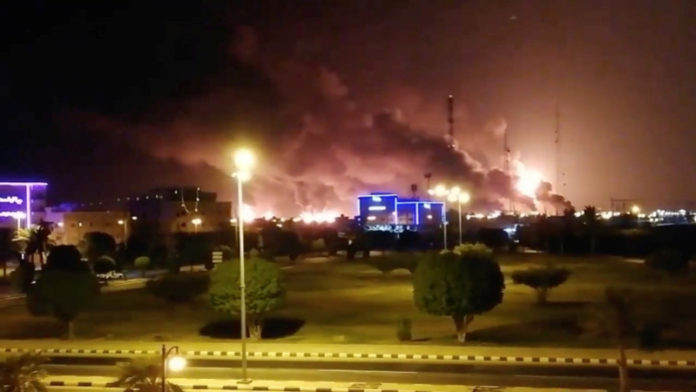 Oil Prices increase in the international market after an attack on major Saudi Arabian oil facilities.

After last weekend’s attack on Saudi Arabia’s oil facilities, oil prices have gone up at a high level in the international market. Oil prices increased at 20 percent to above $71.00 a barrel. This is a huge increase in almost three decades.

U.S President Donald Trump has accused Iran of carrying out the attack. U.S Secretary of State Mike Pompeo said regarding the attack “The United States will work with our partners and allies to ensure that energy markets remain well supplied and Iran is held accountable for its aggression.”

The attack came from Yemen where Iran backed Houthi rebels are engaged in a war with the Saudi Led coalition. Tehran has denied the accusations. However, there have been a series of attacks on oil tankers this year of which Iran is being suspected. This could give rise to another conflict in the tensed Middle East region.

Brent reached 11.77 percent to $67.31 in early Asia trading after the attacks at oil facilities managed by Saudi ARAMCO. Brent reached nearly about 20 percent on Monday at one stage. This is a huge percentage increase since 1990 when then Iraq President Saddam Hussein invaded Kuwait.

West Texas Intermediate, on the other hand, climbed 10.68 percent to $60.71. West Texas Intermediate reached 15 percent at one point before coming down. Stocks in Asia were also affected due to the oil attacks. CNOOC, one of China’s largest oil companies reached 8.7 percent in Hong Kong whereas PetroChina, Asia’s biggest oil and gas producer jumped to 7.4 percent on the Hang Seng Index.

Tom Kloza, a chief oil analyst for the Oil Price Information Service has called it a “Big deal”. He further said “It is the biggest shock to the oil market since (Hurricane) Katrina. And like Katrina, it will likely haunt us for months.” He further said that gasoline prices might “creep up” rather than going down as witnessed previously.